Welcome to 1Weston.com!
The Arts Council of Greater Weston, Inc. is a 501(c) (3) not for profit organization dedicated to enhancing the community by ensuring that there are a wide variety of cultural and educational opportunities available locally.

Events for All Ages:

Answer to our December puzzle

Now in it's 16th season the Weston Foreign Film series is sponsored by the City of Weston and The Arts Council of Greater Weston. Five international movies selected for our Greater Weston audience will be screened on the second Monday of each month from November through March 2022. Showtimes: 4:45 p.m. and 7:30 p.m. at the AMC Weston 8 Theater.
Special Offer: Series tickets on sale beginning October 1, $35.00 for the entire series November-March

Individual tickets $8.00 at the door if not sold out.

Monday, November 8, 2021
The Film Critic / El Crítico - (Argentina)
Victor, a film critic, is weary of Hollywood’s romantic comedies until he meets Sofia, an attractive woman When random events bring them together, he suspects the movie genre he hates is taking revenge. (2013 | Spanish with English subtitles | 98 min.)

Monday, December 13, 2021
Back to Burgundy / Ce Qui Nous Lie – (France)
After a ten year absence, Jean returns to his hometown when his father falls ill.Reuniting with his sister, Juliette, and his brother, Jeremie, requires them to re-build their relationship and trust as a family again. (2017 | French with English subtitles | 98 min.)

Monday, January 10, 2022
Like Father, Like Son / Soshite chichi ni naru (Japan)
Ryota is a successful workaholic businessman. When he learns that his biological son was switched with another boy after birth, he faces the difficult decision to choose his true son or the boy he and his wife have raised as their own. (2013 Japanese with English subtitles 120 min)

Monday, February 14, 2022
French Toast (South Africa)
Lisa lives with her father, Izak on a wine farm in Franschoek.Her mother died some time ago, and left a french toast recipe that only a few people know.One day she finds her mothers diary and to her astonishment finds out that she has a brother or sister in France somewhere. She decides to go and find her sibling. Her boyfriend, Theo, is on the verge of asking her to marry him, but understands that she has to go. In France she meets a chef, Jean-Pierre, who works in the Alexandre cafe shop. He is looking for a photographer for his cook book. Because she cant speak French, she decides to help him but then he must help her find her sister or brother. They have fun looking for her sibling but then something happens that makes Jean-Pierre disappear and he asks her not to look for him. (2015 Afrikaans, English, French 87 min)

Monday, March 14, 2022
The Five Star Life (Italy)
Forty-something Irene had a dream job that made her life easy: she was indeed a luxury hotel inspector and her work got carried out in a wonderful ever-renewed setting, from Paris to Gstaad to Berlin to Morocco to China... But does a dream job necessarily mean a dream life? Irene tried not to ask herself the question too openly. Yes she was single but she had manged to remain on good terms with Andrea, her former life companion. For sure she was childless but she occasionally took care of her two little nieces. And it was such fun to play the mystery guest in those magnificent hotels... Things could have gone on that way hadn't one day Irene met Kate Sherman... (2013 Italian with English subtitles 85 min)

Celebrate the Arts Day engages children and families through interactive exhibition and related programming. In collaboration with the Weston Town Center, The City of Weston and Young at Art Museum this is a fun filled day with art booths and entertainment provided by local students and arts professionals.

Dedicated to supporting the arts in the Weston School district, we celebrate the outstanding works being created in our classrooms with a month long exhibition showcasing works by students from pre-K through high school. A reception is attended by student artists, families, teachers and city officials who assist in awards presentations.

Weston World Fest is a free annual community event run by volunteers, if you would like to be a part of this exciting event email: info@1weston.com.

This unique annual event brings together the customs and colors of the world for an amazing afternoon of cuisine, entertainment and culture! Kids will love participating in our Passport Challenge, while adults can shop our specialty vendor booths and visit our sponsor booths with their SponsorPass. And everyone, young and old, can enjoy the incredible variety of international foods and onstage performances. Entry is free to the public. Stop in at the Arts Council booth (blue topped tents) on the day of the event for information and passports.

Be Sure to register for your space!

Save your space! Register here.

Students 14 years of age and older register below for volunteer opportunities.

We welcome adult volunteers that would like to join us in the planning and logistics of our many wonderful events
as well as volunteers behind the scenes that are able to assist with technical, social and administrative tasks.
If you would like to volunteer please email us at info@1weston.com 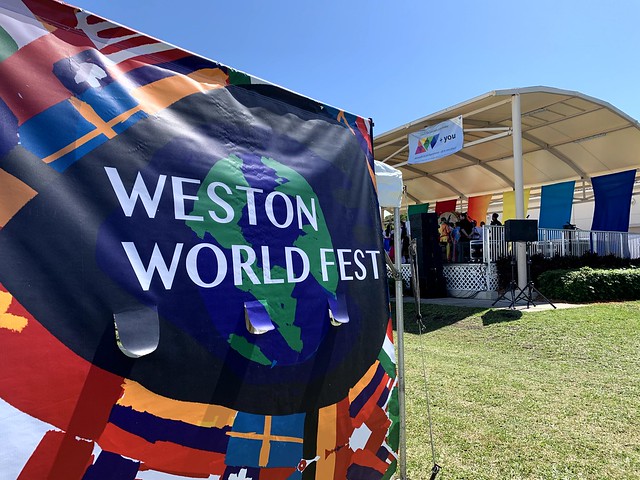 For all the latest in Arts & Culture in Weston read our monthly News Letter below!

Sign Up Now
Stay informed! For Email Newsletters you can trust.

Our Partners
The Arts Council of Greater Weston is proud to have so many partners from our local business community. Please show your support by thanking them for everything they do to help us bring the best possible cultural events to our community year after year!

For Sponsorship Opportunities email us at: events@1weston.com
How you can help
Have an idea for a new event in Weston? Want to share your thoughts on how to make an existing event better? Or, just want to know how you can help make our community an even better place to live and have fun??

We are a 100% volunteer organization and are always looking for new partners in our community. So e-mail us at the address below, we can't wait to hear from you!
Email: info@1Weston.com

Sign Up Now
For Email Newsletters you can trust.